Seth and Dr. Sap bring you a podcast about Michigan's greatest teams. This episode: The Mad Magicians of 1947.

1. FRITZ AND HIS MAGICIANS

Fritz Crisler: the John Beilein of Michigan football. Headed the rules committee, put wings on Michigan's helmets, and made Michigan the non-cheaters they would more or less remain until today and certainly were not before. The War: 1945 Army game and Crisler invents the platoon system. He also uses the War to replace his players with soldiers stationed at Michigan's various programs. Michigan's 1945 team was tiny and young, and the 1947 team was those guys as juniors and seniors PLUS the war heroes who came back. The Mad Magician offense: base power out of the single-wing, tons of screens, reverses, spinning fullback. Has a lot in common with the Army offense we just saw.. 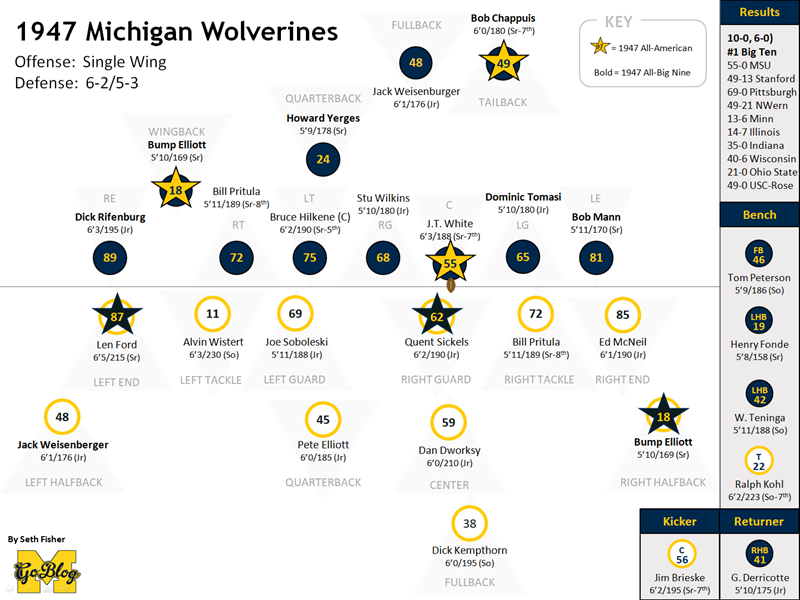 One of the great products of the University of Michigan, Dworsky designed Crisler Arena, LAX, and a bust of Crisler. He was also one of two great linebackers of his day, with Penn's Chuck Bednarik, though Dworsky was probably better. We get him on the phone and share his recollections of this season.

Blow out MSC, blow out a very good Stanford and Pitt (69-0!) to climb to #1. Tight game with Northwestern until the offense explodes in the second half, tight game with Minnesota and another with Illinois. Just 6 points (by Wisconsin, during backup hour, in a 40-6 win) given up the rest of the season.

Heisman vote: Johnny Lujack of ND wins it (that's sorta fair) over Chappuis. ND gets the #1 nod after the regular season (with some help of some #4 and #8 votes for Michigan from Southern media mad that Michigan plays three African-Americans), but a re-vote after the Rose Bowl puts Michigan on top. Assessing Crisler as he retires and leaves Bennie Oosterbaan in charge.