PART I is here and covers the players and the nonconference games. Also people liked my album artwork so yeah, we made the T-shirt. I can't break it in for you like that but we put it on the softest shirt available. If you people want the sweatshirt above you're out of luck because I made it off something I found on e-Bay and then Ace bought. But you can still get in on the Brown Jug Shirt through the end of today.

The Sponsor: If you're buying or reselling, talk to Matt Demorest at HomeSure Lending now and see if you can't lock in a low rate while it lasts. In addition to being more ethical, knowledgeable, hands-on, intelligent, and fun to work with, Matt's exactly as excited for Michigan hockey as you are.

Special Guests: These are turning into Hardcore Histories with these interviews but what are you going to do when you've got Jim Scarcelli and Johnny Kolesar joining you to talk about the team that might have been Bo's best national championship claim.

Wisconsin 33-6 (starts at 0:47): Before there was Barry Alvarez the guy who built Wisconsin was Dave McClain, who beat Michigan in 1981 and went way back with Bo, who has nicknames for every guy they play. Kick six They're coming in with Nate "Blue Moon" Odomes, a 2nd round pick of the Bills in '87. Kick six ices the game after the scrubs give up Michigan's first TD of the year. The Badgers bus almost doesn't make it: 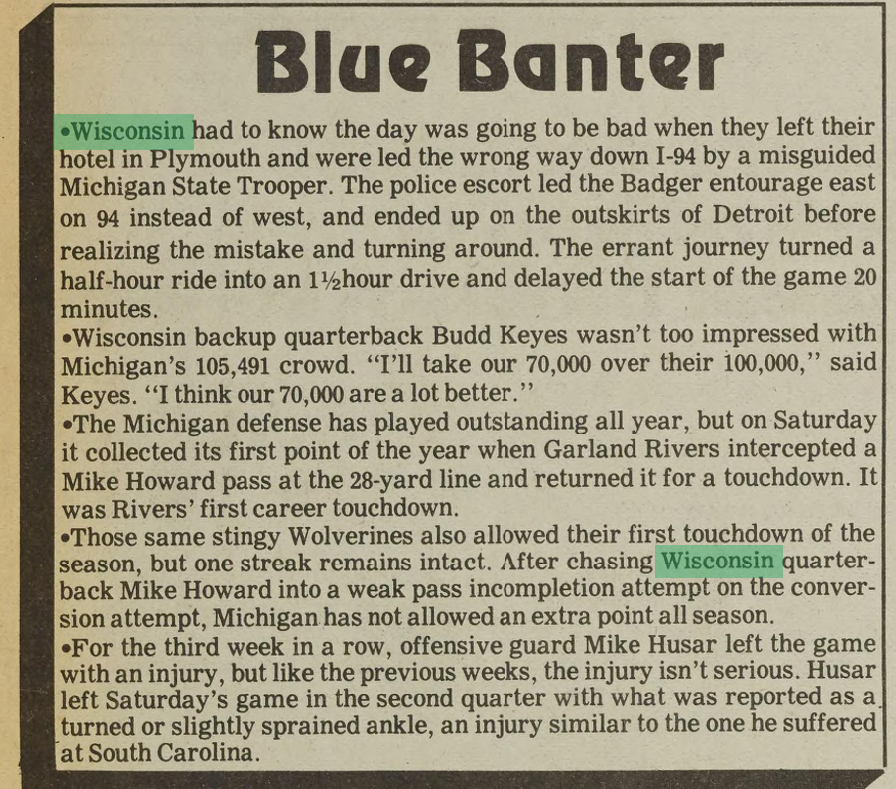 @Michigan  State 31-0 (starts at 8:01): Red-letter and Green-letter games. Revenge for Harbaugh. MSU's got their 1984 situation: quarterbacks are all hurt. That doesn't explain how Michigan also blocked their first punt and took a 14-0 lead in the opening two minutes. Some big names on that MSU team though, including the guy who set the Big Ten rushing record, RB Lorenzo White, plus WRs Andre Rison and Bobby Ingram, and Nick Saban who recruited everybody but the OL, which got eaten alive by Messner.

Indiana 42-15 (starts at 37:10): One of those classic Bo games where it's close at halftime and a blowout after because the other team just played their whole season in the first half. Bo was fired up to coach against Bill Mallory: no Sally plays in this one!

@Illinois 3-3 (starts at 40:18): Illinois realizes Michigan's not using the Flanker, according to the Flanker. They ran the '83 front in '85 and Michigan had a hard time moving the ball; they also fumbled on the goal line.

@Minnesota 48-7 (starts at 1:02): First game at the Metrodome. Half empty but LOUD. Lou Holtz option team. Quarterbacks back then could object to the noise and the ref could quiet them; there was like a 12- or 15-minute delay as Harbaugh played with the crowd. Turf sucked.

3. THE GAME, THE FIESTA, AND THE KICKER

Ohio State 27-17 (starts at 1:12:16): All the metrics came together. Johnny Kolesar's gotta be better than Chris Carter. Ask Jamie Morris why Harbaugh nearly gets killed on The Pass.

Nebraska 27-23 (starts at 1:32:31): Tom Osborne's option doesn't work when they turn it over, and the Huskers did a LOT of that. Best team they faced perhaps.

The Future: Was Bo washed up? This is is still his program because of the '85 team.